Smite Season 7 is here! With a brand new season come new changes and more importantly, new skins! And it looks like we already have a Tier 5 skin on our hands.

Without going into much detail, let’s get this clear first. Tier 5 skins in Smite are the “best” and most expensive skins compared to the rest of the skin tiers. Recolor/Tier 1 is basically the standard skin with a recolor. Next, Tier 2 has a few visual upgrades. Further, Tier 3 is a thematic change with different animations and voice packs occasionally. Tier 4 is an upgraded Tier 3 with all the changes mentioned from Tier 3 confirmed. Tier 5 skins are dynamic (auto-evolving as the God levels up in-game) and contain all Tier 4 qualities but are more awesomely done. Purchasing a Tier 5 skin involves a lot of gems (Smite’s in-game currency). Gems can either be purchased or earned from playing Smite regularly.

Take a look at the skin:

Like the name suggests, this skin’s theme revolves around Hou Yi being a connoisseur of animals of magical significance (Totems). His abilities are intertwined with the animals surrounding him. They went all in with the ultimate ability Sunbreaker, though. That is seriously some Godzilla stuff going on.

Skins bring us to the next point. Smite, being a free-to-play game, earns money through other non-traditional means. Mainly promotions and skins. Can’t blame them, their cosmetic items are brimming with innovation and fresh ideas; not just from their own creative team but also from the community. The existing community is almost always excited about new skins, enough to actually purchase them as soon as possible. Who wouldn’t want Thor in a mega mecha suit, Odin slam-dunking on some fools, or even this? Smite has earned 300 million and counting revenue for Hi Rez. With additional servers being installed throughout the world for Smite and developments seen in their other IPs, Smite is looking good for Hi-Rez financially.

What Else is New?

Season 7 brings more changes into the game. The main game mode, Conquest, has undergone changes providing additional jungle camps on the map and focusing on making each role impactful. Also, camps spawn earlier and sturdier while certain snow-balling camps have been nerfed. The four buff camps have been tweaked as well. Blue buff (Mana) will provide +2 MP5 per 10% missing mana instead of +20 MP5 straight-up, Yellow buff (Speed) will provide 10% Crowd Control Reduction, Red buff (Damage) has 5% Power against Enemy Gods removed, and Purple buff (Void) will provide 10% Attack Speed. That should balance out all stages of the game, especially the early game.

Joust, a 3v3 game mode, also boasts a new Chinese map. Now, each team has its own blue buff as well as the newly added speed buff. The singular red buff rests at the middle inviting competition. Moreover, there are additional camps added to the map. Jungling is definitely the focus going into the new Joust. They also have incorporated lore behind the changes in Joust.

Odin and Bastet have been re-worked, with the possibility of a Loki re-work on its way too. Odin’s third ability now has three phases that can be fired according to him; first phase radiates an attack speed buff, second phase chases and slows enemies, and the third phase stuns if hit. Also, Odin’s ultimate can be broken but at the cost of taking damage from his spears. Bastet too has changes in her third ability and her ultimate. Her kit is better suited now as an Assassin.

Not to mention, the main attraction of Smite, Gods and Goddesses themselves. Mulan, the Chinese warrior deity and Disney star, joined the Battleground of the Gods just weeks ago. She’s the 108th addition to the expansive roster! Furthermore, Smite has announced a few more God/Goddess releases for 2020. The guardian of the Bifrost and Thor’s comrade, Heimdallr and Mulan have already joined in. Next in line seems to be Baba Yaga herself. She will probably be a Mage and there are some pretty interesting speculations about her abilities. Goddess of the Sun Amaterasu’s beloved Tsukuyomi-no-Mikito, God of the Moon, is also on the list.

Is it Worth Getting Into Smite Now?

Smite has 30 million registered users, according to Hi-Rez. However, when it comes to how consistent it is in its engagement, the topic has been turbulent. Looking at this in 2020, the PC player-base isn’t as numerous as before. Also, the Smite World Championship hasn’t grown compared to its predecessors. The technical issues and bugs that Smite faces don’t help either.

However, that’s not the whole picture. Smite, unlike DOTA2 and League of Legends, is not a PC exclusive. Smite is on PC, Xbox One, PS4, and last year released on the Switch. Now, this divides the player-base consequently creating innumerable statistics across the board. Sure, we could look at Steam Charts but Smite isn’t restricted to PC. What’s more, consoles have at least the same Smite player-base strength as PC.

Smite is everywhere. It may seem it is doing badly but those numbers are certainly pertaining to specific platforms only. Smite is nowhere near LoL or CS GO for sure, but it’s definitely not going away anytime soon. So, go ahead and join the Battleground of the Gods, one of the most innovative MOBAs yet! 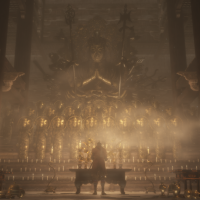 I'm here to learn and to have fun. Isn't that life anyway?